History of the Herbarium

The collection of specimens that is now known as the Chrysler Herbarium began with a set of New Jersey plants amassed by Nathaniel Lord Britton (later Director of the New York Botanical Garden) for the State Geological Survey of New Jersey from 1881–1888. Britton conducted fieldwork, mostly in the northern part of the state and enriched his collection through gifts and exchange with many notable botanists of that time including Addison Brown, W.H. Leggett, I.C. Martindale, John. E. Peters, and T.C. Porter. This collection consists of approximately 4,450 sheets.

From 1889–1918 Byron D. Halsted occupied the Chair of Botany and the herbarium grew with the collections of his students and from the series, "Halsted's American Weeds", which was issued prior to 1892. Around 1882, the college acquired, by purchase, a set of about 750 plants collected by A. C. Cuthbert, chiefly in the vicinity of Trenton and some from Georgia. The existence of this collection was forgotten for some years and it was located in the attic of Geological Hall in 1928 through the efforts of Dr. A.P. Kelley.

Around that time, an effort was made to assemble a representative collection of the plants of New Jersey. Professor Kelley contributed many specimens from New Jersey, Pennsylvania, California, and a number of specimens from Texas. During that period, specimens collected by A. Ruth were obtained through exchange with the University of Pennsylvania.

In 1928, the botany department acquired the valuable collection amassed by P.D. Knieskern, M.D., who was an early plant collector in New Jersey (1800–1871). In 1856, he published his catalog of the plants of Monmouth and Ocean Counties. He also published a Catalogue of Plants of Oneida County, N.Y. He lived in New Jersey from 1841 until his death in 1871. He was a friend of both John Torrey and Asa Gray. He also published a New Jersey list of plants in the Annual Report of the New Jersey Geological Survey for 1856. He died in Shark River, NJ. H.H. Rusby, of Columbia University College of Pharmacy, had purchased this collection, and then presented it to Rutgers with some of his own collections from New Mexico and South America. The Knieskern collection consists of around 3,500 sheets, many of which were acquired through exchange with prominent botanists of that time.

John Alvin Small (19??–1977) was born in Palmyra, Maine and received the B.Sc. from the University of Maine in 1924. He went to Rutgers for graduate work and in 1928 he earned his Ph.D. from there working under William H. Martin. His thesis was on wilt disease of tomatoes. From 1924 to 1932 he was the State Seed Inspector of New Jersey as well as the plant pathologist for that state from 1928 to 1932. In 1928, he started his long association with the New Jersey College for Women (later Douglass College). Small was very interested in New Jersey flora, especially because he wanted to introduce a course in ecology at the college. In pursuit of this, he attended the Torrey field trips and collected plants for the herbarium while he did so. He was fascinated with the New Jersey pine barrens and often led field trips there. Moreover, for seventeen years he was in charge of trail maintenance on the Appalachian Trail for TBC and was the editor for the "Guide to the Appalachian Trail from the Connecticut Line to the Susquehanna River." He taught at Douglass College from 1928 to 1965 when he retired.

In 1929, Marion Alvin Johnson (1901–1964) came to Rutgers. He was born in Iowa where he grew up on a farm. He graduated from William Penn College in Iowa in 1924. He went on to get his Ph. D. from the University of Chicago with his thesis on the morphology of Equisetum. He worked on the study of terminal growing regions of a large number of tropical and semi-tropical woody plants. In 1945, after Chrysler's death, he was the sole member of the Rutgers' botany staff. In 1954, he became the Dean of the Graduate School of Rutgers University.

In the 1930s, the botany staff members made a concerted effort to continue building a representative state collection. The southern part of the state was targeted to fill in the gaps in the collection. During this period a card index of distribution maps was begun. In 1933, K.K. Mackenzie, a resident of Maplewood, N.J. donated 1000 specimens from various parts of the state. At this time James L. Edwards was contributing specimens of rare New Jersey plants. Another valuable contributor was Mr. Otway H. Brown, one of the leading experts of the Cape May flora, who donated many specimens from that county. About 400 sheets from the herbarium of Witmer Stone, the author of The Plants of Southern New Jersey (1912), were also acquired.

Dr. Murray Buell was born in New Haven, Connecticut and earned his A.B. in 1930 from Cornell University. In 1935, he earned the Ph.D. from the University of Minnesota working with the great plant ecologist, William S. Cooper. Dr. Buell came to Rutgers in 1946 and stayed there until 1971. His wife, Helen Foote Buell, who he worked with, earned her Ph.D. in phycology at the University of Minnesota. Rutgers scientists, especially Murray Buell, did a great deal to help establish botanical ecology for the NYC vicinity during the 1960's. During his 25 years at Rutgers, he had thirty-nine graduate students earn their Ph. D. under his mentoring. Among the students were Gily E. Bard, William Niering, and Jack S. McCormick. Along with his wife and Rutgers colleague Dr. John Alvin Small, Dr. Murray Buell set up the Buell-Small Succession Study of the Hutcheson Memorial Forest. The study began in 1958 with the sampling of two fields abandoned the previous fall. Ecologists had known for a long time that communities and ecosystems change through time, but most of the studies had been based on comparing similar sites of different ages. Botanists and ecologists at Rutgers had been joined by colleagues and citizens to save Mettler's Woods, the last, old-growth, upland oak forest in New Jersey. Dr. Murray Buell became the first director of the Hutcheson Memorial Forest, the new name of Mettler's Woods. The fields, located in this forest, were and are still used for research on succession and other ecological, botanical, and zoological phenomena.

By 1954, when David E. Fairbrothers joined the botany department, the herbarium had grown to over 40,000 specimens. At that time, the department was relatively small but very active. Marion A. Johnson, James E. Gunckel, Edwin T. Moul, Murray Buell, and the young David Fairbrothers conducted studies over a diverse range of disciplines. Each member of the department worked on a variety of projects, but were each known for specific areas of study. Edwin Moul was a noted phycologist and personally collected or acquired through exchange many specimens which built the algal portion of the herbarium into an impressive collection. Small was included in the Rutgers College program and he played an important role in not only building the ecology program at Rutgers but in making it one off the most outstanding ecological programs in the northeast as well as one of the top five in the country (Gunckel 1977:71) and David Fairbrothers started his long career at Rutgers working in a variety of areas. All these scientists collected many specimens that are now preserved in the Chrysler Herbarium.

The field activities of the department staff were not restricted to New Jersey. Dr. A.P. Kelley made collecting trips to the western states, and Professor M.A. Johnson spent the summers of 1930 and 1931 in Tennessee and Arkansas. During the summers of 1933 and 1938, Professor M.A. Chrysler collected in the alpine floras of Switzerland and the Pyrenees and, in 1934, Chrysler collected in New Mexico and California. In 1936, he joined the John Hopkins University expedition to Jamaica, the Canal Zone, and Costa Rica. In 1937, Chrysler collected in Puerto Rico and Cuba, focusing his collections mainly on the vast fern flora and endemic species of those regions. With the duplicates of these collecting trips, exchanges were made to obtain the following:

Duplicates of New Jersey specimens were exchanged for such material as:

Other notable collections and exchange are: 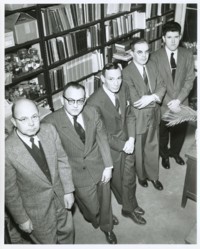 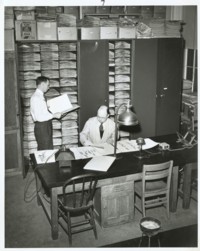 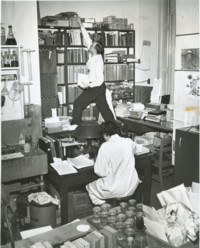 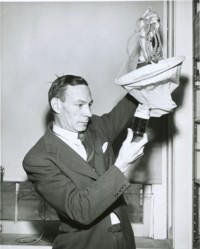